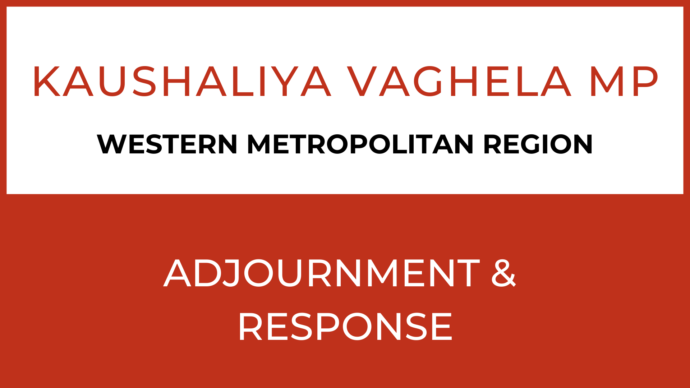 Ms VAGHELA (Western Metropolitan): My adjournment matter is directed to the Deputy Premier and Minister for Education, the Honourable James Merlino. In April 2018 the Andrews Labor government announced $17.9 million of funding to give more than 5000 children attending state-funded kinders the opportunity to learn a language other than English for the very first time so they can squeeze the most out of their early learning years. As part of this initiative announcements were made for 150 kindergartens to offer weekly sessions in one of 15 languages, including Mandarin, Arabic, Punjabi, Italian, Japanese, French, Greek, Hebrew and Spanish. Further announcements were made for up to 10 kindergartens to run a bilingual program where up to half of the kinder program would be offered in another language. The 150-kindergarten list also included facilities in regional Victoria. Among these were 29 kindergartens which were to offer Aboriginal languages and 27 to offer Auslan. The $17.9 million early childhood language program also provided additional staff to teach children a new language in partnership with existing staff at no cost to parents or early childhood services. Learning languages at kinder often results in kids learning the language of their grandparents as well as inspiring them to take an interest in other cultures. It is also shown to improve brain function, their English reading and writing skills, cognitive flexibility, strengthened brain development and improve problem-solving skills. The action I seek from the minister is that he provide an update to my constituents on how the early childhood language program is assisting four-year-old children to learn another language in Western Metropolitan Region and provide a list of kinders in my region that are running this program.

Mr MERLINO (Monbulk—Minister for Education) (14 August 2019): The Andrews Labor Government congratulates the kindergartens of the Western Metropolitan Region on being part of a Victorian first: the Early Childhood Language Program. The $17.9 million program will see around 5,000 children per year in kindergartens across the state having the opportunity to learn in another language. As the Member for the Western Metropolitan Region has noted, learning languages at a young age has many benefits including helping children develop literacy skills, strengthened brain development, improved problem-solving ability and cognitive flexibility. By encouraging diverse language skills in our kindergartens, Victorians can build stronger local communities and prepare children for a more globalised and connected world.

The following eight kindergartens in the Western Metropolitan Region were selected to deliver the Early Childhood Language Program:

Five of these services have begun delivering the language program, with the remaining three currently finalising the recruitment of a suitably qualified language teacher. I have been lucky enough to visit a number of kindergartens participating in the language program to see first-hand how much early childhood educators and children are enjoying the program. Feedback from children, families and staff about the program has been very positive. I am sure the children of the Western Metropolitan Region will also enjoy and greatly benefit from the Early Childhood Language Program.