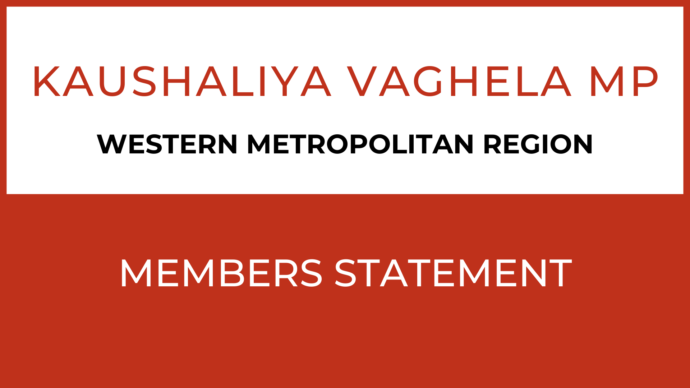 Ms VAGHELA (Western Metropolitan): I had the pleasure of attending the Buddhist monk’s residence inauguration organised by the Mahamevnawa Buddhist Meditation Centre (MBMC) on 7 March 2020 in Werribee South along with the Consul General of Sri Lanka, Mr Kapila Fonseka. MBMC Melbourne West is a registered not-for-profit charitable organisation. They run Sunday school on a weekly basis in my constituency. The focus of the centre is to teach, learn and practise the teachings of the Supreme Buddha to enhance the virtues and moral values of kids, youth, elders and adults.

Victoria’s Buddhist community is growing, with more than 180 000 Victorians who identify as belonging to the Buddhist faith, who come from all corners of the world. The Mahamevnawa Buddhist centre also organises a variety of community projects, such as blood donation campaigns, tree-planting campaigns and park-cleaning activities. The centre has been serving the community since 2016 from their head office based in Mount Evelyn. The event was the inauguration of a new property bought from donations collected from the centre’s members to provide a residence for the venerable monks in Werribee South.

It was spiritually rewarding to be a part of this day and to learn about Buddha’s teachings of wisdom, kindness and tolerance and his universal message of peace. I was very touched by their warm and welcoming reception. I would like to thank the MBMC for making me part of this special day, a very rare opportunity. I congratulate them and look forward to working with them on their future projects.