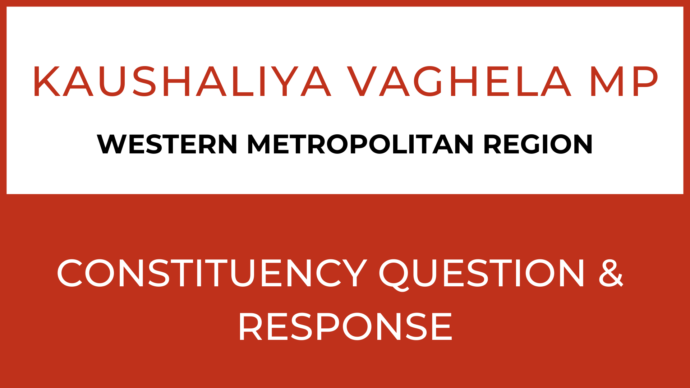 My question relates to the minister’s portfolio responsibilities for crime prevention.

Pasifika young people and their families in the west will have access to more support following a funding boost from the Victorian government.

A funding of $400,000 in two programs has been announced, aimed at providing early interventions and mentoring for Pasifika young people in Brimbank.

Under the investment, $200,000 will go towards the Pasifika Thrive program, which will be delivered in collaboration with local schools to provide early intervention mentoring for young people.

The remaining $200,000 will be allocated to the Village Response Plan program, led by Charis Mentoring and community partners, who support Pasifika young people who have had contact with the justice system, and to help reduce reoffending.

These initiatives will increase resilience and build on the strengths of young people from Pasifika and African backgrounds.

My question to the minister is: can the minister advise how these programs will benefit the constituents in my area of Western Metropolitan Region?

The Brimbank Pasifika community has come together to support each other following the tragic event in June this year when Solomone Taufeulungaki, a 15-year-old boy, was fatally attacked by a group of young people outside a shopping centre in Melbourne’s west.

The funding towards the Village Response Plan will boost these community efforts by providing additional support to the Pasifika community in Brimbank to reduce the risk factors for youth offending, using culturally appropriate and trauma-informed principles. This includes providing mentoring for young people, as well as community outreach and advocacy. In addition, the Pasifika Thrive program will deliver early intervention support for young people to improve their wellbeing and build the capacity of local organisations to better support Pasifika young people.

The programs will be delivered across school and community settings in Brimbank. The benefits expected from these programs will also positively impact the broader Western Metropolitan Region as they will not only support young people and families, but also promote healing to mitigate the risk of further violence in the community.

This funding is part of government’s commitment to supporting young people and their families and communities in order to keep young people out of the justice system and on a positive track.