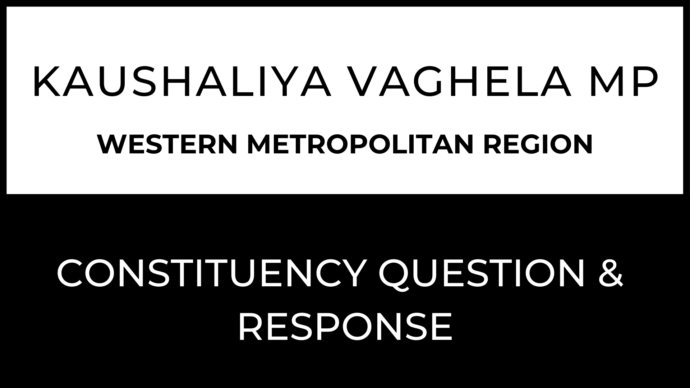 Ms VAGHELA (Western Metropolitan): My constituency question is directed to the Minister for Water and Minister for Police, the Honourable Lisa Neville MP. New crime statistics have noted a rise in car thefts in the city’s western suburbs. An increase of more than 5 per cent has been seen in the west in reference to motor vehicle thefts. The west remains an anomaly, as there has been a significant reduction in car thefts in the eastern, southern and northern suburbs. This is an alarming situation for the communities in the west. While these crimes are opportunistic, according to the community survey I conducted people in the west are very concerned about their safety. My question to the minister is: can you advise me what action the Victorian government is taking to ensure that car thefts are reduced in Western Metropolitan Region?

The Victorian Government is giving Victoria Police the resources it needs to keep our growing community safe. Communities right across Victoria are seeing an increased police presence in their area with the roll­ out of additional frontline police across the state.

The Victorian Budget 2022-23 is delivering an additional 502 police and 50 Protective Service Officers (PSOs) over the next two years to meet the growing needs of the state. This will bring a total of 3,637 new police officers to our streets, building on top of the government’s record $4.5 billion police investment. The North West Metro Region, which services the Western Metropolitan area, has already received an additional 726 sworn police since 2016.

Victoria Police continues to provide highly visible and proactive patrols to prevent and deter this type of offending. Through the utilisation of Automatic Number-Plate Recognition (ANPR) technology and police intelligence, Victoria Police is able effectively patrol hotspot locations and times, and identify and recover stolen vehicles, including stolen or counterfeit number plates, whilst focusing on persons of interest. As of December 2021, 221 Victoria Police vehicles have been fitted with ANPR technology, completing the roll out across the Highway Patrol fleet.