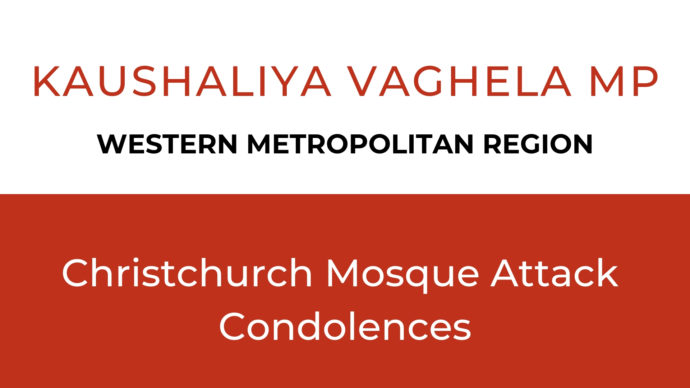 Ms VAGHELA (Western Metropolitan) (15:54:50): I too rise to share my sincere condolences with the people of New Zealand and the Muslim community around the world. Friday, 15 March 2019, will be remembered as a dark day in New Zealand’s history, a day which saw the tragic death of 50 innocent men, women and children who lost their lives in the Christchurch terrorist attacks. They were simply going on with their routine life, peacefully attending their Friday prayers. Like the majority of the people around the world, I strongly condemn this act of terrorism against the Muslim community in New Zealand. Those who commit these acts of violence against the Muslim community seek to destroy the diversity we hold dear. We should stand together in solidarity and unite even more strongly. We will not let them divide us and ruin our harmony. Fear and hate have no place in our community. These attacks have clearly shown that terror has no religion and we can all be victims. Victorians have come together strongly and have shown their true support of the Muslim community. We have seen many hundreds of people gathering at local mosques to express their compassion and support. They were simply attending to grieve and mourn with the Muslim community. Many mosques received messages of support and flowers from the non-Muslim community. This is a sign of our solidarity and strong diversity and is a clear depiction of who we are as Australians. Extremist views have no place in our society, regardless of where they are derived from. I extend my deepest condolences to the victims in Christchurch, their families and the people of New Zealand. I hope that we can unite even stronger as a community to overcome these barbaric events. A friend of mine who is a leader of a Muslim community organisation was with around 600 people at an event in a park. He has written an email to me saying that quite a few community members approached him and raised concerns that the majority of them left their own countries to come to Australia to live peacefully. With acts like this, they say they are scared to go to the mosque. It saddens me that a friend of mine and all the members of his organisation cannot pray peacefully and cannot go to the mosque. It truly disturbs me. I want to say to my friends in Melbourne and all the Muslims around the world: we support you, our prayers are with you and our thoughts are with you. I pray that we do not come across such instances ever again.