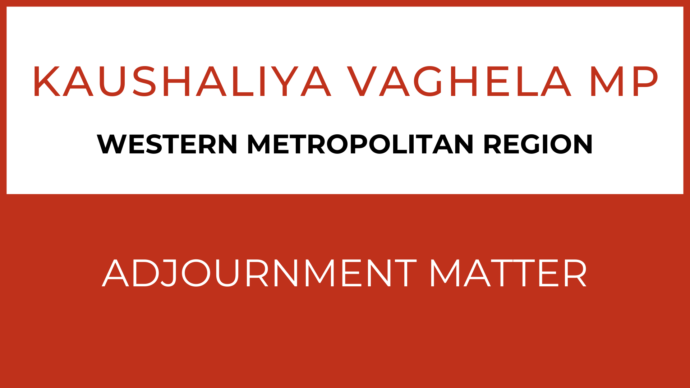 Ms VAGHELA (Western Metropolitan) (17:37): My adjournment matter is directed to the Honourable Shaun Leane, Minister for Local Government, Minister for Suburban Development and Minister for Veterans. This adjournment matter relates to the portfolio responsibilities of local government. Victoria’s fastest growing communities are set to become even better places to live and work thanks to continued support from the Andrews Labor government’s Growing Suburbs Fund. This round of funding is for a total of 32 projects to receive a share of $50 million from the Growing Suburbs Fund, which helps Melbourne’s 16 thriving interface and peri-urban councils deliver high-quality facilities for their communities. Ranging from new playgrounds and parks to community centres, sports pavilions and kindergartens, the fund’s legacy ensures residents in fast-growing areas have the top-quality facilities and opportunities they expect and deserve, while delivering an economic boost.

First launched in 2015, the Growing Suburbs Fund has now invested more than $67 million towards 53 projects in both Melton and Wyndham across Western Metropolitan Region. Since its establishment in 2015, the Growing Suburbs Fund has facilitated $913.2 million in local infrastructure, created more than 8880 jobs and supported 253 projects across Melbourne’s fastest growing area. Two exciting new community facilities for Wyndham will receive a total of $4.5 million in funding: $3 million will help transform the current Wyndham Cultural Centre and a $1.5 million grant will support the new skate park and other facilities at Lawrie Emmins Reserve. Melton City Council will receive $3.38 million towards the Mt Atkinson East Community Hub and Mt Atkinson active space precinct. When complete, the hub will offer a range of facilities for the new community, including a children’s centre with three- and four-year-old kindergarten, maternal and child health services and flexible space for classes and activities.

I note that this week’s budget has announced an additional $50 million to extend the Growing Suburbs Fund for the next financial year. The action I seek from the minister is to provide me with an update on the time lines for this newly announced funding and the recently announced projects and to advise how these projects support employment opportunities for the constituents of the Western Metropolitan Region.

The Growing Suburbs Fund supports the critical infrastructure needs of our fastest growing communities. The Fund is positioned to respond quickly to the pressures being experienced by growing communities by bringing forward local projects that will make a big difference in the day-to-day lives of outer suburban families.

Since its establishment in 2015, the Growing Suburbs Fund has provided grants of $375 million for 253 community projects, supporting $913.2 million in total investment. These projects have created more than 8,880 jobs, comprising direct and indirect employment from construction activity and ongoing local employment opportunities as services begin operating from new or renewed facilities.

In the 2020-21 State Budget, the Victorian Government invested $50.2 million, which was in addition to the $25 million provided as part of the COVID-19 stimulus recovery package.

Projects funded in the Western Metropolitan Region include:

In the recent 2021-22 State Budget, the Victorian Government announced an additional $50 million in funding for the Growing Suburbs Fund to continue to support the infrastructure needs of interface and peri-urban communities. The program guidelines for the 2021-22 funding round will be released shortly, with the program formally open for applications later this year.

I look forward to working closely with the councils to ensure the successful delivery of community infrastructure projects funded under the Growing Suburbs Fund, including projects that received support in the Western Metropolitan Region