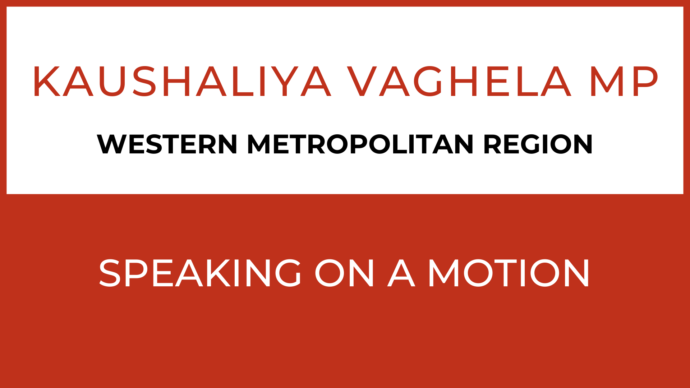 Ms VAGHELA (Western Metropolitan): I too rise to speak on the motion that my colleague Ms Stitt has moved relating to the Andrews Labor government’s achievements in the 2019–20 budget. In my inaugural speech I spoke twice about removing traffic congestion and the importance of the vital infrastructure that we need, including better roads and better public transport. I am a regular user of public transport. I use trams, trains and buses, and at times it is frustrating. I try to use different train lines. I try to use different train stations in my constituency, and I can see why people get frustrated when they are using public transport. I am proud of the Andrews Labor government. We made commitments prior to the 2014 and 2018 elections on infrastructure. We are delivering on those promises, and we are getting things done. The work that we are doing for transport infrastructure is one of a kind in the history of infrastructure in Victoria. I am really proud to talk about some of the major infrastructure projects. Melbourne is Australia’s fastest growing city. In fact the number of transport trips made every single day is expected to almost double by 2050. As a city that is continuing to grow, our transport system must keep up. The Suburban Rail Loop will circle Melbourne’s suburbs, connecting communities with jobs, schools, universities and the airport without having to travel into the CBD. Connecting every major train line and with a connection to Melbourne Airport, the Suburban Rail Loop will transform the way people travel around Melbourne. It will cut congestion across the entire transport network, removing thousands of cars from our roads and thousands of passengers from existing rail services. At the same time the loop will create more than 20 000 jobs during construction, with up to 2000 apprentices, trainees and cadets. This city-shaping project will complement the Melbourne Airport rail and other infrastructure, and also the Metro Tunnel project already underway as part of Victoria’s Big Build, while also providing new connections for communities in regional Victoria. With 29 level crossings already gone for good, the Victorian budget 2019–20 invests a further $6.6 billion to deliver on our promises to remove a total of 75 crossings by 2025, cutting congestion and making our communities safer. The Victorian government is removing 75 dangerous and congested level crossings. The removal of level crossings will significantly improve safety for road users and pedestrians; improve travel around our city for public transport users, pedestrians, cyclists and drivers; create thousands of jobs during construction and help people get home safer and faster. Planning and construction works are well underway at sites across Melbourne. In the west, level crossings will be removed on the Werribee, Williamstown, Sunbury, Geelong and Ballarat lines. The removal of the Old Geelong Road level crossing in Hoppers Crossing will be the fifth along the Werribee line, leaving only three level crossings between Newport and Werribee stations, excluding those on the Altona loop. The level crossing at Kororoit Creek Road in Williamstown North on the Altona loop has already been removed, with level crossings still to be removed at Aviation Road in Laverton and Werribee Street and Cherry Street in Werribee. Three crossings at Fitzgerald Road in Ardeer and Robinsons Road and Mount Derrimut Road in Deer Park will be removed along the Geelong and Ballarat lines. The removal of these level crossings will include the construction of a new Deer Park station. This is part of an overall budget package worth $6.6 billion. An investment of $2.1 billion will transform train services to Sunbury, upgrading every station along the line and enabling the rollout of new high-capacity Metro trains. This will help cut travel times and provide for an extra 113 000 passengers on the Sunbury line during peak periods. This is part of a $3.4 billion package that will transform the entire suburban train network, delivering a massive upgrade to the Sunbury line, stage 2 of the Hurstbridge line and duplication of the Cranbourne line. Not only will we remove the level crossings, but we will also update the car parks, the train stations and the roads. The Andrews Labor government committed to build more car parks at various train stations. In Western Metropolitan Region we will build 400 new and upgraded car parks at Caroline Springs station and 150 new and upgraded car parks at Deer Park station. The existing car parks at both stations are often full by the morning peak, forcing commuters to park elsewhere and clogging up nearby local streets. Delivering these new car parks will free up parking in neighbouring streets and make it easier for more locals to catch the train. The projects will also include new lighting and CCTV to make the stations safer. Labor’s Car Parks for Commuters Fund will see 11 000 new and upgraded car parks being built at some of the busiest metropolitan and regional train stations. With around 55 000 station spaces currently across the state, the investment will see a 20 per cent bump in available parking. The updated Aircraft station car park includes new lighting and CCTV. It will include 100 spaces at the train station. Another upgrade will be at the Watergardens station car park, which will include new lighting, CCTV and signage. Also, 1600 extra car parks will be provided across Wyndham Vale, Werribee, Watergardens and Tarneit, with 579 spaces at Watergardens station. Furthermore, the Caroline Springs car park will include 400 spaces at the Caroline Springs station. I can go on and on and on, but I will just sit down.