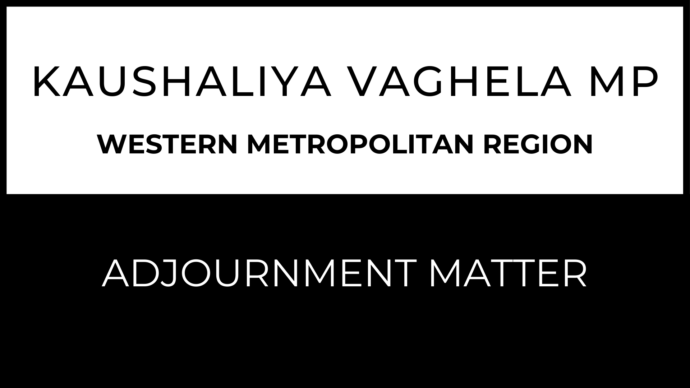 Ms VAGHELA (Western Metropolitan): My adjournment matter is directed to the Honourable Martin Foley MP, Minister for Health, Minister for Ambulance Services and Minister for Equality in the other place. This adjournment matter relates to the portfolio responsibilities of health. Being able to give birth is one of the most rewarding yet difficult things an expectant mother goes through; however, the situation is dire for many expectant mothers in the city’s western suburbs. I understand that, as the Wyndham City Council says, there is a growing healthcare crisis unfolding in Wyndham where in some cases women are being forced to give birth in cars on the side of the road due to a shortage of maternity beds at the hospital. According to a recent media report, there are not enough maternity beds for expectant mothers in the fastest growing municipality in the country to care for pregnant women.

Such experiences demonstrate the difficult challenges residents of the Western Metropolitan Region are facing. The growth in Wyndham is unprecedented. The younger generation dominates the Wyndham population, with almost 60 per cent being 35 years old or younger. Many new migrants are also choosing Wyndham as their home and the place where they want to build their families. According to the Australian Bureau of Statistics in 2020 Wyndham’s registered births were 4850. This was the highest in the west and second highest in all Victorian local government areas, so it is very clear that there is a requirement for investment.

There is a need for another hospital in Wyndham city, because the current healthcare infrastructure is not sufficient for the population. Whilst the proposed hospital in Melton, the construction of the new Footscray Hospital and the expansion of the Sunshine Hospital will provide some relief, it will not be enough to meet the growing needs of Wyndham residents. Another hospital needs to be fast-tracked for Wyndham city residents. The action I seek from the minister is to provide me with an update on when the government will commit to building another hospital in the Western Metropolitan Region.