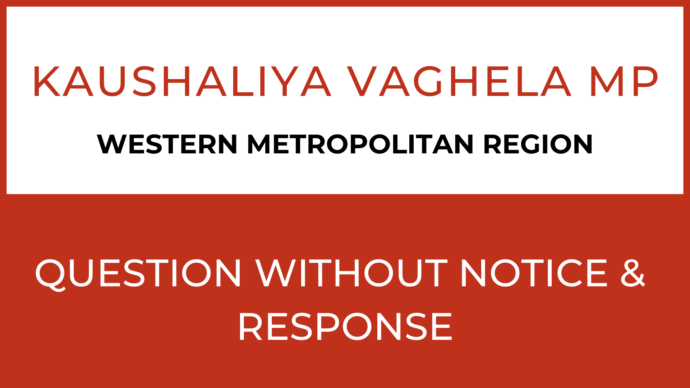 Ms VAGHELA: My question is to the Minister for Health. Could you please update the house on what impact the federal government cuts are having on the operation of Victorian health services?

Ms MIKAKOS (Northern Metropolitan—Minister for Health, Minister for Ambulance Services): I thank the member for her question, and I also congratulate her for honouring women in her International Women’s Day colours today. The member would be well aware of the impact that the federal government cuts are having on her health services. I can advise the house that tomorrow I will be attending the COAG Health Council. My top priority is calling on the minority Morrison government to deliver a fair hospital funding deal to Victoria and also to reinstate the funding that they have ripped out of our Victorian hospitals. The Andrews Labor government has an ambitious and expansive vision for public health services in Victoria. We are rolling out more ambulances, building more hospitals, employing more paramedics, nurses and doctors and delivering more elective surgeries than ever before. Over the last term of office we delivered $3.2 billion on health infrastructure. This contrasts with a paltry $8 million, or 0.25 per cent, to Victorian health infrastructure from the federal coalition government. We have no intention of slowing down. Over the course of this term we have committed to a further $3.8 billion worth of new and upgraded health infrastructure, and of course that is going to deliver a lot of new infrastructure to Melbourne’s west, such as the new Footscray Hospital, the Joan Kirner Women’s and Children’s Hospital and many other projects. Of course we are going to deliver 1100 extra nurses and midwives, another 90 paramedics, an additional 500 000 specialist appointments for regional Victoria and many other projects. Sadly 4 minutes is never going to be enough for me to talk about all the projects that we are going to be delivering in the health portfolio. But what I can say to the member is that, whilst we are leading in health, the minority Morrison government is taking every opportunity to cut health spending and in the process is letting all Victorians down. We saw health funding slashed by Mr Morrison as Treasurer, and he is continuing that as Prime Minister. The proposed hospital funding deal that they have put on the table undercuts the previous federal Labor government’s commitment to a 50-50 contribution to hospital funding between the commonwealth and the states and territories. The coalition’s deal refuses to recognise an equal 50-50 funding split and imposes an arbitrary 6.5 per cent cap on funding growth. For our state, for Victoria, what this equates to is a shortfall of $2.1 billion over the first five years of the agreement. What this means, by way of one example, is 334 000 fewer elective surgeries. Victorian patients will miss out. Whilst we have got the federal government crying crocodile tears about refugees and asylum seekers accessing health services in Australia and the outrageous comment that was made by Mr Dutton in this regard, they have no interest whatsoever in providing adequate funding to Victorian patients to make sure they can actually access public health services. If they are actually serious about waiting lists, then they need to make sure they give us a fair funding deal. They have also made retrospective changes to our hospital funding and clawed back $305 million of money already spent by our health services on things like elective surgery. So the $305 million is equivalent to 18 000 hip replacements, 593 000 dialysis treatments or over 274 000 chemotherapy treatments. So we are going to take the fight to Canberra, and I note the silence from those opposite. It is about time they stood up for Victorian patients